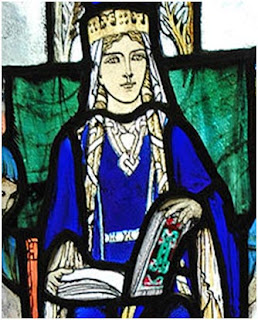 She is also known as Margaret of Wessex, was an English princess of the House of Wessex. Margaret was sometimes called “The Pearl of Scotland”. Born in exile in Hungary, she was the sister of Edgar Atheling, the short-ruling and uncrowned Anglo-Saxon King of England. Margaret and her family returned to England in 1057, but fled to the kingdom of Scotland following the Norman conquest of England of 1066. Around 1070 Margaret married Malcolm III of Scotland, becoming his queen consort. She was a pious woman, and among many charitable works she established a ferry across the firth of forth for pilgrims travelling to dunfermline abbey, which gave the towns of South Queens ferry and North Queens ferry their names. Margaret was the mother of three kings of Scotland and of a queen consort of England. According to the Life of Saint Margaret, attributed to Turgot of Durham, she died at Edinburgh Castle in 1093, just days after receiving the news of her husband’s death in battle. In 1250 she was canonized by Pope Innocent IV, and her remains were reinterred in a shrine at Dunfermline Abbey. Her relics were dispersed after the Scottish Reformation and subsequently lost.

Margaret's biographer Turgot, Bishop of St. Andrews, credits her with having a civilizing influence on her husband Malcolm by reading him stories from the Bible. She instigated religious reform, striving to make the worship and practices of the Church in Scotland conform to those of Rome. This she did with the inspiration and guidance of Lanfranc, the future Archbishop of Canterbury. She also worked to bring the Scottish Church practice in line with that of the continental church of her childhood. Due to these achievements, she was considered an exemplar of the “just ruler”, and influenced her husband and children especially her youngest son, later became David I also to be just and holy rulers.

She attended to charitable works, serving orphans and the poor every day before she ate, and washing the feet of the poor in imitation of Christ. She rose at midnight every day to attend church services. She invited the Benedictine order to establish a monastery at Dunfermline in Fife in 1072, and established ferries at Queensferry and North Berwick to assist pilgrims journeying from south of the Firth of Forth to St. Andrews in Fife. A cave on the banks of the Tower Burn in Dunfermline was used by her as a place of devotion and prayer. St Margaret’s Cave, now covered beneath a municipal car park, is open to the public. Amongst her other deeds, Margaret also instigated the restoration of the monastery at Iona. She is also known to have been an intercessor for the release of fellow English exiles, forced into serfdom by the conquest.

In her private life, Margaret was as devout as she was in her public duties. She spent much of her time in prayer, devotional reading, and ecclesiastical embroidery. This appears to have had a considerable effect on the more uncouth Malcolm who could not read; he so admired her devotion that he had her books decorated in gold and silver. One of these, a pocket gospel book with Evangelist portraits, is in the Bodleian Library in Oxford.

Saint Margaret was canonized in 1250 by Pope Innocent IV in recognition of her personal holiness, fidelity to the Church, work for religious reform, and charity. On 19 June 1250, after her canonization, her remains were moved to a chapel in the eastern apse of Dunfermline Abbey. In 1693 Pope Innocent XII changed her feast day to 10 June in recognition of the birth date of the son of James VII of Scotland and II of England. In the revision of the General Roman Calendar in 1969, 16 November became free and the Church transferred her feast day to 16 November, the day of her death, which had always been recognized in Scotland. However, some traditionalist Catholics continue to celebrate her feast day on 10 June.