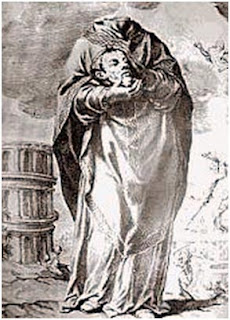 He is a saint associated with the diocese of Béziers, in Languedoc, southern France.

According to Gregory of Tours, Aphrodisius was an Egyptian who was martyred in Languedoc along with his followers Caralippus, Agapius, and Eusebius.

A Christian tradition states that he was a prefect or high priest of Heliopolis who sheltered the Holy Family at Hermopolis when they fled into Egypt. He learned about Jesus from the Alexandrian Jews returning from a pilgrimage in Jerusalem. According to Christian legend, Aphrodisius went to Palestine to meet Jesus and became one of his disciples. After the Resurrection, Aphrodisius received the Holy Spirit at Pentecost. He accompanied sergius paulus to province.

They evangelized Narbonensis. Sergius settled in Narbonne. The legend continues that Aphrodisius arrived at Béziers mounted on a camel and became a hermit in a cave near the city. He lived in it a long time before becoming a bishop.

Local traditions assign Aphrodisius as the first Bishop of Béziers and state that he was decapitated by a group of pagans, along with his companions, on the street now known as Place Saint-Cyr, the site of a Roman circus used for gladiators' fights.

Aphrodisius was executed by beheading. The head was kicked into a well, but the water gushed out and the decapitated Aphrodisius picked up his own head, and carried it through the city. Town’s people spilled snails on the road and Aphrodisius stepped on them without breaking one. Several stone masons began to mock him, calling him a madman. They were miraculously punished by being turned into stones.  Aphrodisius left his head at the cave that he had previously occupied. This was a spot on which later stood a chapel dedicated to Saint Peter, later a basilica named after Aphrodisius .This martyrdom is supposed to have occurred on April 28, 65 AD, during the reign of Nero.

According to the Bréviaire de Béziers, during the 14th and 15th centuries, he was presented as bishop and confessor who died of natural causes. It is only during the 16th century that new legends of his beheading were created. There are several saints with the name of Aphrodisius. The old martyrologies bear five saints with this name: the bishop of Béziers; a martyr of Tarsus in Cilicia  celebrated on June 21; another martyr killed in Cilicia with 170 companions on April 28 c. 86 AD; another killed at Scythopolis, honored on May 4; and a martyr of Alexandria killed with several companions, honored on May 13. There is also a bishop of Hellespont with this name who at the beginning of the 4th century defended the Resurrection against a sect led by a man named Hierax.

The first literary account of the life of Saint Aphrodisius of Béziers is probably that of Ado, the Carolingian author, who introduces the mission of Aphrodisius into the acts of Saint Paul de Narbonne. Gregory of Tours, in his History of Franks, mentions Aphrodisius. The first mention of the sanctuary dedicated to Aphrodisius is made by Usuard, who undertook a voyage in 858 to bring back from Spain relics for his abbey. In his relation of the voyage, he says to us that after “having left Cordoba, he returned by Girona, Narbonne and Béziers, a city famed for its relics of blessed Aphrodisius”.