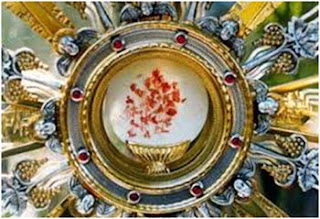 This miracle occured in 1236, a time when a heresy in the Church called Berengarianism was rampant in Europe and which denied the True Presence of Our Lord in the Eucharist.

A priest was on pilgrimage to Rome to ask for strength in his vocation and to remove his doubts about tthe presence of Jesus in the Eucharist. On his way he stopped at Bolsena, a small town north of Rome.

During Mass in Bolsena at the consecration as the priest said “This is My Body,” the Host began to bleed profusely. The priest took the Corporal and wrapped up the bleeding Host, although blood fell on the marble floor in front of the altar. He immediately took it to Pope Urban IV who was in nearby Orvieto at the time. The Holy Father declared that a Eucharistic Miracle had occured which dispelled the heresy of Berengarianism.