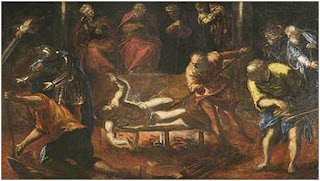 St Lawrence is thought to have been born in Huesca, a town in the Aragon region that was once part of the Roman province of Hispania Tarraconensis. Here he encountered the future Pope Sixtus II, who was of Greek origin, one of the most famous and highly esteemed teachers in Caesaraugusta (today Zaragoza), which was one of the empire's most renowned centers of learning. Eventually, both left Spain for Rome. When Sixtus became the Pope in 257, he ordained St Lawrence as a deacon, and though still young appointed him first among the seven deacons who served in the patriarchal church. He is therefore called "archdeacon of Rome", a position of great trust that included the care of the treasury and riches of the church and the distribution of alms among the poor.

After the death of Sixtus, the prefect of Rome demanded that St. Lawrence turn over the riches of the Church. Saint Ambrose is the earliest source for the tale that St Lawrence asked for three days to gather together the wealth. He worked swiftly to distribute as much Church property to the poor as possible, so as to prevent its being seized by the prefect. On the third day, at the head of a small delegation, he presented himself to the prefect, and when ordered to give up the treasures of the Church he presented the poor, the crippled, the blind and the suffering, and said these were the true treasures of the Church. One account records him declaring to the prefect, "The Church is truly rich, far richer than your emperor." This act of defiance led directly to his martyrdom and can be compared to the parallel Roman tale of the jewels of Cornelia.

According to lore, St Lawrence was able to spirit away the chalice used during Christ's Last Supper to Huesca, in present-day Spain, with a letter and a supposed inventory, where it lay hidden and unregarded for centuries. When St. Augustine connects St Lawrence with a chalice, it is the chalice of the Mass.

For in that Church, you see, as you have regularly been told, he performed the office of deacon; it was there that he administered the sacred chalice of Christ’s blood.

According to Catholic tradition the Holy Grail is a relic sent by St Lawrence to his parents in northern Aragon. He entrusted this sacred chalice to a friend who he knew would travel back to Huesca. While the chalice's exact journey through the centuries is disputed, it is accepted by many Catholics that it was sent by his family to this monastery for preservation and veneration. Historical records indicate the chalice has been venerated and preserved by a number of monks and monasteries through the ages. Today the Holy Grail is venerated in a special chapel in the Catholic Cathedral of Valencia, Spain.

A well-known legend has persisted from earliest times. As deacon in Rome, St Lawrence was charged with the responsibility for the material goods of the Church and the distribution of alms to the poor. St Ambrose of Milan relates that when St Lawrence was asked for the treasures of the Church he brought forward the poor, among whom he had divided the treasure as alms. "Behold in these poor persons the treasures which I promised to show you; to which I will add pearls and precious stones, those widows and consecrated virgins, which are the church’s crown." The prefect was so angry that he had a great gridiron prepared, with coals beneath it, and had Lawrence’s body placed on it (hence St Lawrence's association with the gridiron). After the martyr had suffered the pain for a long time, the legend concludes, he made his famous cheerful remark, "I'm well done. Turn me over!" From this derives his patronage of cooks and chefs, and also of comedians.

The life and miracles of St Lawrence were collected in The Acts of St Lawrence, but this is now lost. The earliest existing documentation of miracles associated with him is in the writings of St Gregory of Tours (538–594), who mentions the following:

A priest named Fr. Sanctulus was rebuilding a church of St. Lawrence, which had been attacked and burnt, and hired many workmen to accomplish the job. At one point during the construction, he found himself with nothing to feed them. He prayed to St. Lawrence for help, and looking in his basket he found a fresh, white loaf of bread. It seemed to him too small to feed the workmen, but in faith he began to serve it to the men. While he broke the bread, it so multiplied that that his workmen fed from it for ten days.

Due to his conspiring to hide and protect the written documents of the Church, St Lawrence is known as the patron saint of archivists and librarians.

St Lawrence is one of the most widely venerated saints of the Roman Catholic Church. Legendary details of his death were known to Damasus, Prudentius, Ambrose and Augustine. The church built over his tomb, San Lorenzo fuori le Mura, became one of the seven principal churches in Rome and a favorite place for Roman pilgrimages. Devotion to him was widespread by the fourth century.

St Lawrence is especially honored in the city of Rome, where he is one of the city's patrons. There are several churches in Rome dedicated to him, including San Lorenzo in Panisperna, traditionally identified as the place of his execution; the area near the San Lorenzo basilica is called Quartiere San Lorenzo. He is invoked by librarians, archivists, cooks, and tanners as their patron. His celebration on 10 August has the rank of feast throughout the Catholic world. On this day, the reliquary containing his burnt head is displayed in the Vatican for veneration.