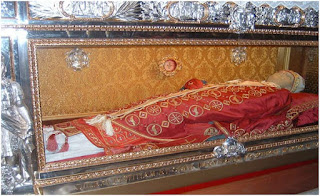 Saint Gregory VII, born Hildebrand of Sovana, was Pope from 22 April 1073 to his death in 1085. Gregory VII was beatified by Pope Gregory XIII in 1584 and canonized in 1728 by Pope Benedict XIII.

One of the great reforming popes, he is perhaps best known for the part he played in the Investiture Controversy, his dispute with Henry IV, Holy Roman Emperor that affirmed the primacy of papal authority and the new canon law governing the election of the pope by the College of Cardinals. He was also at the forefront of developments in the relationship between the emperor and the papacy during the years before he became pope. He was the first pope in several centuries to rigorously enforce the Church's ancient policy of celibacy for the Catholic clergy and attacked the practice of simony.

He thrice excommunicated Henry, who in the end appointed Antipope Clement III to oppose him in the political power struggles between the Catholic Church and his empire. Hailed as one of the greatest of the Roman pontiffs after his reforms proved successful, Gregory VII was, during his own reign, despised by some for his expansive use of papal powers.

The Pope having been such a prominent champion of papal supremacy, his memory was evoked on many occasions in later generations, positively and negatively, often reflecting later writers' attitude to the Catholic Church and the papacy. Benno of Meissen, who opposed Gregory VII in the Investiture Controversy, leveled against him charges such as necromancy, torture of a former friend upon a bed of nails, commissioning an attempted assassination, executions without trials, unjust excommunication, doubting the Real Presence of the Eucharist, and even burning the Eucharist. This was eagerly repeated by later opponents of the Catholic Church, such as the English Protestant John Foxe. Joseph McCabe describes Gregory as a "rough and violent peasant, enlisting his brute strength in the service of themonastic ideal which he embraced." In contrast, the noted historian of the 11th century H.E.J. Cowdrey writes, "he (Gregory VII) was surprisingly flexible, feeling his way and therefore perplexing both rigorous collaborators ... and cautious and steady-minded ones ... His zeal, moral force, and religious conviction, however, ensured that he should retain to a remarkable degree the loyalty and service of a wide variety of men and women."

Election to the papacy

On the death of Alexander II which was on 21 April 1073, as the obsequies were being performed in the Lateran Basilica, there arose a loud outcry from the clergy and people: "Let Hildebrand be pope!", "Blessed Peter has chosen Hildebrand the Archdeacon!" Later, on the same day, Hildebrand was conducted to the church of San Pietro in Vincoli and elected Pope there in legal form by the assembled cardinals, with the due consent of the Roman clergy, amid the repeated acclamations of the people.

His lifework was based on his conviction that the Church was founded by God and entrusted with the task of embracing all mankind in a single society in which divine will is the only law; that, in her capacity as a divine institution, she is supreme over all human structures, especially the secular state; and that the pope, in his role as head of the Church, is the vice-regent of God on earth, so that disobedience to him implies disobedience to God: or, in other words, a defection from Christianity. But any attempt to interpret this in terms of action would have bound the Church to annihilate not merely a single state, but all states.

Thus Gregory VII, as a politician wanting to achieve some result, was driven in practice to adopt a different standpoint. He acknowledged the existence of the state as a dispensation of Providence, described the coexistence of church and state as a divine ordinance, and emphasized the necessity of union between the sacerdotium and the imperium. But at no period would he have dreamed of putting the two powers on an equal footing; the superiority of church to state was to him a fact which admitted of no discussion and which he had never doubted.

He wished to see all important matters of dispute referred to Rome; appeals were to be addressed to himself; the centralization of ecclesiastical government in Rome naturally involved a curtailment of the powers of bishops. Since these refused to submit voluntarily and tried to assert their traditional independence, his papacy is full of struggles against the higher ranks of the clergy.

This battle for the foundation of papal supremacy is connected with his championship of compulsory celibacy among the clergy and his attack on simony. Gregory VII did not introduce the celibacy of the priesthood into the Church, but he took up the struggle with greater energy than his predecessors. In 1074 he published an encyclical, absolving the people from their obedience to bishops who allowed married priests. The next year he enjoined them to take action against married priests, and deprived these clerics of their revenues. Both the campaign against priestly marriage and that against simony provoked widespread resistance.

Impact on the Eucharist

Gregory VII was seen by Pope Paul VI as instrumental in affirming the tenet that Christ is present in the Blessed Sacrament. Gregory's demand that Berengarius perform a confession of this belief was quoted in Pope Paul VI's historic 1965 encyclical Mysterium fidei: “I believe in my heart and openly profess that the bread and wine that are placed on the altar are, through the mystery of the sacred prayer and the words of the Redeemer, substantially changed into the true and proper and life giving flesh and blood of Jesus Christ our Lord, and that after the consecration they are the true body of Christ.”

Pope Gregory VII died in exile in Salerno; the epitaph on Gregory VII's sarcophagus in the city's Cathedral says: "I have loved justice and hated iniquity; therefore, I die in exile."