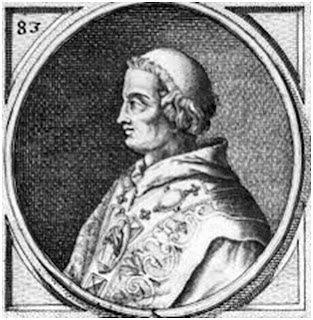 Pope Agatho (died on 10 January 681) was Pope from 26 June 678 to his death in 681. He is venerated as a saint by both Catholic and Eastern Orthodox churches. Little is known of Agatho before his papacy. He may have been among the many Sicilian clergy in Rome, at that time, the Islamic Caliphate attacks on Sicily in the mid-7th century.

Shortly after Agatho became Pope, St Wilfred, Archbishop of York, arrived at Rome to invoke the authority of the Holy See on his behalf. Wilfred had been deposed from his see by Theodore, Archbishop of Canterbury, who had carved up Wilfred’s diocese and appointed three bishops to govern the new, sees. At a synod which Pope Agatho convoked in the Lateran to investigate the affair, it was decided that Wilfred’s diocese should indeed be divided, but that Wilfred himself should name the bishops. The major event of his pontificate was the Sixth Ecumenical Council (680–681), following the end of the Muslim Siege of Constantinople, which suppressed the Monothelite heresy that had been tolerated by previous popes. The council began when Emperor Constantine IV, wanted to heal the schism that separated the two sides, wrote to Pope Donus suggesting a conference on the matter, but Donus was dead by the time the letter arrived. Agatho was quick to seize the olive branch offered by the Emperor. He ordered councils held throughout the West so that legates could present the universal tradition of the Western Church. Then he sent a large delegation to meet the Easterners at Constantinople.

The legates and patriarchs gathered in the imperial palace on 7 November 680. The Monothelites presented their case. Then a letter of Pope Agatho was read that explained the traditional belief of the Church that Christ was of two wills, divine and human. Patriarch George of Constantinople accepted Agatho's letter, as did most of the bishops present. The council proclaimed the existence of the two wills in Christ and condemned Monothelitism, with Pope Honorius being included in the condemnation. When the council ended in September 681 the decrees were sent to the Pope, but Agatho had died in January. The Council had not only ended the Monothelite heresy, but also had healed the schism. Agatho also undertook negotiations between the Holy See and Constantine IV concerning the relations of the Byzantine Court to papal elections. Constantine promised Agatho to abolish or reduce the tax that the popes had to pay to the imperial treasury on their consecration. He is venerated as a saint by both Roman Catholics and Eastern Orthodox. His feast day among Roman Catholics is on 10 January. Eastern Christians, including Eastern Orthodox and the Eastern Catholic Churches, commemorate him on 20 February.