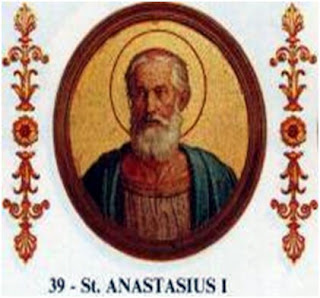 He was born in Rome, the son of Maximus. He condemned the writings of the Alexandrian theologian Origen shortly after their translation into Latin. He fought against these writings throughout his papacy, and in 400 he called a council to discuss them. The council agreed that Origen was not faithful to the Catholic Church.

[ During his reign he also encouraged Catholics in North Africa to fight Donatism.[2] He instructed priests to stand and bow their head as they read from the gospels.[1] Among his friends were Augustine, Jerome, and Paulinus. Jerome speaks of him as a man of great holiness who was rich in his poverty.[4] He was eventually buried in the Catacomb of Pontian together with his son, who would be Pope Innocent I, probably a unique case of a Pope being succeeded by his son.