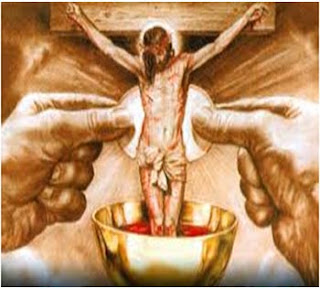 In 1345, a man who was a devout Catholic became very ill. He told his family he would like to receive Holy Viaticum. The family notified the pastor of the then known Old Church. The priest, after administering the sacrament, advised the family, if the ill man threw up (which he was known to do after taking nourishment) they were to empty the contents in the fire. The man threw up and the family did what they were advised to do by the priest, they threw the contents in the fire in the sick room. This incident occurred on March 12th.

Early the next morning, one of the women went to rake the fire and she noticed in the middle of the grate, the Blessed Sacrament in the form of host. A light surrounded it. The woman became upset and immediately put her hand in the fire to rescue the host. This she did without any ill effects to herself. She did not burn her hand. The woman was surprised to find the host was cold! She immediately called in a neighbor and asked her to take the Sacred Host to her home. The neighbor took a clean cloth, placed the host on it and locked it in a box. She then took it home. When the husband of the woman who found the host heard what had taken place, he requested to see it. He tried to lift it off the white cloth it rested on but the Sacred Particle resisted as if to say it did not want to be touched by this man's hands.

A priest was then summoned who took the host and placed it in a pyx. When he went to wash the cloth which held the Blessed Sacrament and return it to the original box, he noticed the pyx was upset and the host was gone!

The next morning the neighbor returned for her original box and cloth. When she opened the locked box she once again found the Sacred Host in it! There was then no doubt that Our Lord wanted this miracle to make known! The priest notified the clergy of Amsterdam and a procession was held to carry the host to the church. The home of the sick man soon became a chapel and as early as 1360 public processions and pilgrims traveled to the site of the miracle.

On May 25, 1452, a large conflagration broke out which left three fourths of the city in ruins. It was during this time, the chapel known as the Holy Room became subject to the flames. Strangely, the monstrance containing the Miraculous Host, (which had been brought over to the chapel from the old church) was spared. In 1456, a new Holy Room was built surrounded by a beautiful church.

Many pilgrims went to visit the shrine seeking cures and spiritual help. One pilgrim, archduke Maximilian, later a Roman Emperor, came seeking a cure in 1480. God heard his prayer and he was cured. In thanksgiving, the archduke dedicated a beautiful window to the Holy Room.

By the second half of the sixteenth century, Catholics in Amsterdam fell under persecution of the Protestants. The Holy Room fell under Protestant rule. In 1910, rather than sell the property to the Catholics, the chapel was torn down. However, devotion to this Eucharistic Miracle still takes place on March 12th at the church nearest the site.