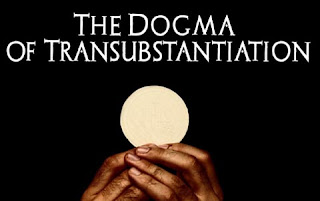 Eastern Orthodox, Oriental Orthodox, and Roman Catholics, who together constitute the majority of Christians, hold that the consecrated elements in a valid celebration of the Eucharist indeed become the body and blood of Christ. This belief is held also by some Reform and Protestant Christian churches, Lutherans and Anglicans, though they generally deny transubstantiation.

While there is a large body of theology noting the many Scriptural supports for transubstantiation, in general, Orthodox and Catholics consider it unnecessary to "prove" from texts of Scripture a belief that they see as held by Christians without interruption from the earliest, apostolic times. They point out that the Church and its teaching existed before it assembled and canonized the New Testament, and even before any individual part of the New Testament was written, They also point out that early Christians such as Ignatius of Antioch, Justin Martyr, and Clement of Rome (who were much closer to the event than those who have later proposed a figurative interpretation of the Eucharist), described the Eucharist as truly the body and blood of Christ. They see nothing in Scripture that in any way contradicts this age-old Christian belief that the reality beneath the visible signs in the Eucharist is the body and blood of Christ and no longer bread and wine. Instead, they see this teaching as the same teaching in the Bible's reports of what Christ himself and Paul the Apostle taught.