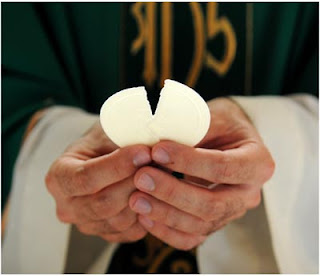 The village of Blanot is situated in a long, narrow valley surrounded by picturesque mountains. Inconspicuous because of its location, it was nevertheless favored by God, who honored it with a Eucharistic miracle. The physical evidence of this event is still preserved in the church in which it occurred.

Before relating the miracle, it would be best to recall the manner in which Holy Communion was distributed in the 14th century (and in many places yet today). During Holy Mass, when the time approached for the distribution of Communion, the communicants would approach the altar railing which separated the body of the church from the sanctuary. Taking their places side by side along the length of the railing, they would kneel. At about the same time, two altar boys would approach the railing and take their places one at each end. Reaching down for a long linen cloth that hung the length of the railing on the side facing the sanctuary, each would take his end of the cloth and flip it over the top of the railing. The communicants would then place their hands beneath the cloth. The priest, holding the ciborium containing the consecrated Hosts, would approach one end of the railing and distribute the Hosts as he moved along its length. At the time of the miracle this was the way in which Holy Communion was received at Blanot.

The miracle occurred on Easter Sunday, March 31, 1331, at the first Mass of the day, which was offered by Hugues de la Baume, the vicar of Blanot. Because of the solemn occasion, two men of the parish named Thomas Caillot and Guyot Besson were also serving in addition to the altar boys. At Communion time the two men approached the altar railing, took their places at each end and turned the long cloth over the railing. The parishioners took their places, held their hands under the cloth and waited for the approach of the priest.

One of the last to receive was a woman named Jacquette, described as being the widow of Regnaut d'Effour. The priest placed the Host on her tongue, turned, and started walking toward the altar. It was then that both men and a few of the communicants saw the Host fall from the woman's mouth and land upon the cloth that covered her hands. As the priest was then placing the ciborium inside the tabernacle, Thomas Caillot approached the altar and informed him of the accident. The priest immediately left the altar and approached the railing; but instead of finding the Host, he saw a spot of blood the same size as the Host, which had apparently dissolved into blood.

When the Mass was completed, the priest took the cloth into the sacristy and placed the stained area in a basin filled with clear water. After washing the spot and scrubbing it with his fingers numerous times he found that, far from becoming smaller and lighter, it had actually become larger and much darker. On removing the cloth from the basin he was surprised to find that the water had turned bloody. The priest and his assistants were not only astonished, but also frightened, and exclaimed, "This is the Precious Blood of our Lord Jesus Christ!" The priest then took a knife and, after washing it, cut from the cloth the piece bearing the bloody imprint of the Host. This square piece of cloth was reverently placed in the tabernacle.

Fifteen days later, an official of the Archdiocese of Autun, Jean Jarossier, journeyed to Blanot to initiate an investigation. With him was the Cure' de Lucenay, a monsignor of Autun, and an apostolic notary. The interrogation of witnesses was conducted in the presence of Pierre Osnonout, the Cure' of Blanot. The results of this investigation were sent by Archbishop Pierre Bertrand to Pope John XXII, who pronounced a favorable verdict and accorded indulgences to those who would celebrate Mass in the parish church of Blanot. Copies of the documents are still kept in the City Hall of Blanot and are described as being in an ancient style which is difficult to read.

The Hosts that remained in the ciborium after the distribution of Holy Communion on that Easter Sunday were never used, and were carefully preserved in the tabernacle. The reason for this is not known, although one might speculate that the priest wished to avoid a possible repetition of the prodigy. In 1706 these Hosts, preserved in good condition after 375 years, were taken in a five-hour procession around the parish of Blanot in observance of the anniversary of the miracle. Taking part in the ceremony were many prelates and a great many people of the parish and the surrounding areas. At the conclusion of the procession, the silver ciborium holding the Hosts was returned to the golden box in which it was kept. This was carefully placed in the main tabernacle of the church.

For many years there were commemorative processions and special observances, but these were discontinued at the start of the French Revolution when violent fanatics were desecrating Catholic churches and taking objects of value.On December 27, 1793, a group of revolutionaries entered the church and boldly opened the tabernacle. The bloodstained cloth, now encased in a crystal tube, was actually handled by one of them, but fortunately was rejected as being of little value. After this desecration of the church, the relic was entrusted to the safekeeping of a pious parishioner, Dominique Cortet. While it was in his home it was venerated and given all respect, yet despite this care, the tube was cracked on both the top and bottom. One of the injuries was caused by M. Lucotte, the Cure' of Blanot, who often kissed it and put it on the eyes of the faithful. The other end was accidentally cracked while it was hidden in the drawer of an armoire.

Following the Revolution, when peace was again restored, many persons were questioned about the authenticity of the cloth within the crystal tube. All agreed that it was the same one that had been kept in the church. After ecclesiastical officials were satisfied as to the relic's authenticity, it was solemnly returned to the church and placed in a box covered with velvet which, in turn, was placed within the tabernacle. Sometime later a new crystal tube was designed for the relic. At either end are rings of gold and copper, with a cross surmounting the top. The tube, with the cloth clearly visible, is sealed and kept within a special ostensorium. This is adorned at its base with four enamel panels which depict events in the history of the relic. Each year on Easter Monday, according to ancient custom, the relic is solemnly exposed in the church of Blanot.