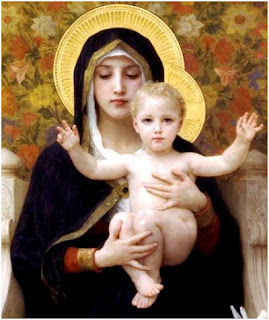 Mary's divine motherhood   was proclaimed at the Council of Ephesus in 431.

Various names are used to describe Mary's role as mother of Jesus. She is called "Mother of God" which translates the more accurately stated Greek term “Theotokos” or “Birth giver of God.”

The Council of Ephesus (431) attributed to Mary the title, Mother of God. This needs to be read against the Council's declaration that in Christ there are two natures, one divine and one human, but only one person. Indeed, according to the Council the holy virgin is the Mother of God since she begot according to the flesh the Word of God made flesh. This decision was further explained by the Council of Chalcedon (451) which says with regard to Mary's divine motherhood: