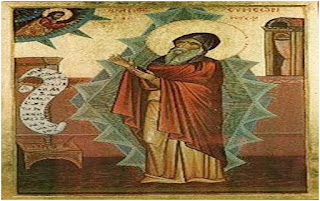 The details of Symeon's life come from his own writings and from the Life of Symeon, written by his disciple Nicetas. He was born at Basileion in Galatia to Basil and Theophano Galaton, members of the Byzantine nobility who supported the Macedonian dynasty. His given name at birth is unclear—it was traditional at that time, when becoming a monk, to take on a new name with the same initial as one's birth name. Symeon may have ignored that tradition in order to take the same name as his spiritual father, Symeon the Studite. In his writings, he sometimes described the experiences of "George," which might have been his birth name. Symeon received a basic Greek school education until the age of eleven, when an uncle recognized that he had potential for higher learning. The uncle helped Symeon to complete his secondary education at the court of the emperor Basil II and his brother Constantine VIII. At age fourteen he met Symeon the Studite (also called Symeon the Pious), a holy monk of the Monastery of Stoudios in Constantinople. That meeting convinced the younger Symeon to forgo higher education and take on Symeon the Studite as his spiritual father. At that time he began studying the life of prayer and asceticism under his guidance, with the desire to immediately enter the monastery. Symeon the Studite asked the young Symeon to wait before becoming a monk, so he spent the years until age twenty-seven serving in the household of a patrician, though according to some sources he served the emperor instead.

Living a worldly life during the day, he reportedly spent his evenings in vigils and prayer, putting into practice the writings of two authors—Marcus Eremita and Diadochos of Photiki—that were given to him by his spiritual father. It was during this time that Symeon had his first experience of God as divine light, as he described later in one of his Discourses (Disc. 22.2–4). He attributed the experience to the prayers of Symeon the Studite. In spite of the experience, the young Symeon confessed that he still fell into worldly ways of living. Direct personal experience of God was to become one of Symeon's central teachings in his writings, and to the monks who followed him.

He spent the next twenty-five years as abbot of St. Mammas, attracting many monks and clergy with his reputation for learning and sanctity.

Not all of the monks were attracted by Symeon's zealous approach. Symeon attempted to reform the Byzantine monasteries, where monks had become subservient to the emperor and had acquired large holdings of property, libraries, and art. His writings and teachings were aimed at returning the monasteries to their traditional role in the early church, urging the monks to take up a life of simplicity, asceticism, purity of heart, and constant prayer. The strict monastic discipline for which Symeon aimed upset several monks in the monastery. Symeon also took a more emotional approach to worship, suggesting that a monk shouldn't take the sacrament without tears. The introduction of vegetarian meals, along with other unique practices to instil discipline and humility, also caused some displeasure among the monks. Fifteen years after becoming abbot, one morning after the Divine Liturgy a group of approximately thirty monks rose against Symeon, who drove them away. Breaking the locks on the monastery gate on their way out, the monks took their appeal to the Patriarch Sisinios, who sided with Symeon and sent the monks into exile. Symeon pleaded on their behalf, doing everything he could to have the monks return to the monastery, including seeking out some of the monks to apologize to them. During his time as abbot, Symeon wrote Hymns of Divine Love (completed during his exile), the Discourses, and many letters and polemical works which have been lost. He also wrote articles relating to his disputes with the church theologians.

these survived as his theological and ethical treatises. In 1005 Symeon resigned as abbot of St. Mammas, appointing one of his disciples in his stead, and taking up a more solitary life at the monastery.

Exile and death In 1009 Symeon was sent into exile near Paloukiton, a small village near Chrysopolis on the Asiatic shore of the Bosphorus. According to one account, he was left by church authorities alone and without food, in the middle of winter. There he found a deserted and ruined chapel that had been dedicated to Saint Macrina. It happened to be on land owned by one of Symeon's spiritual children, Christopher Phagouras, who donated the land and proceeds to start a monastery.

By this time, Symeon had many disciples—some of them, including the patrician Geneseos, appealed to Sergius II, the Patriarch of Constantinople, to lift the order of exile. Out of fear that the dispute would reach the emperor, Sergius II lifted the exile order completely, and then offered to re-establish Symeon at the monastery of St. Mammas and consecrate him as archbishop of an important see in Constantinople. The only qualification was that Symeon must show some restraint in his celebration of Symeon the Studite's festival day. Symeon refused to compromise—the Patriarch, out of respect for Symeon, gave him his blessing to "live together with your disciples and act according to your good pleasure."

Symeon remained at the Saint Macrina monastery, where many close disciples, both monks and secular people, gathered around him. At Saint Macrina he was free of monks who were averse to his discipline and zeal, and free from direct conflict with church authorities. He continued to honor Symeon the Studite—most of the clergy from Constantinople, along with many monks and laymen, joined him during those celebrations. He also wrote during that time and made himself accessible to all who wanted to see him.Symeon spent the last thirteen years of his life in exile, dying from dysentery on March 12, 1022. According to his biographer and disciple, Nicetas, Symeon foretold his own death many years previously, and on his last day called together all the monks to sing the funeral hymns.

Symeon is recognized as a saint by the Eastern Orthodox church. The title of "Theologian" was not given to him in the modern academic sense of someone who is learned in theology, but to recognize someone who speaks from personal experience of the vision of God. Until Symeon's time, that title was reserved mainly for John the Apostle, author of one of the four gospels, and Gregory of Nazianzus, writer of contemplative poetry. His opponents derisively called him the "new" theologian because of his creative approach—his supporters, and later the church, embraced the name in the most positive sense.